This weekend, the pups and I were near Pittsburgh over the weekend for AKC trials.  I generally research dog-friendly parks before we depart on trips, but neglected to do so this time.

My preference is to do something fun and relaxing with whatever dog I’m trialing at some point in our trip, so trips are not just about competing.  The dogs work hard for me and need time to just kick back.

I asked a fellow competitor who was a local resident if she could recommend someplace I could take the dogs for a wade at the end of the day.

She recommended Keystone State Park in Derry, PA, a mere 20 minute drive from the trial site.

On the way there, we stopped at the local Dairy Queen, where I purchased two small vanilla cones.  I usually don’t give the dogs much ice cream, but it was so hot, and they’d worked so hard. I caved.

As I purchased the frozen goodies, I noticed several competitors eating burgers at a corner table.  I smiled & waved as I walked out the door.  “Are those for you?” one asked, pointing at the cones.  “Nope, rewards for the dogs!”

As Kiyo & Toka joyously licked their cool goodies, the women all purchased vanilla cones for their dogs, too.  “We felt guilty.  We’re in there chowing down and our dogs, who worked hard all day, are just sitting in their crates,” a petite blonde woman said, as they paraded past, cones in hand.

Keystone Park was a tonic for us hot, tired competitors.  There are lovely, wide paths that are close to the water. There’s lots of access to the lake, which allows our four-legged friends the ability to wade and swim.

People commented about how lovely and well-behaved both dogs were, but there were no guerrilla attacks by kids not schooled in the way to greet dogs, or crazy people flying up to ‘just say hello!’ and no unleashed dogs to contend with. Everyone who spoke with us was polite and respectful.

We spent several happy hours meandering around, with the dogs wading (Toka) or swimming (Kiyo) in the lake.  Even though it was Memorial Day weekend, the park wasn’t overly crowded.  Always a plus!

Spending time there was a delightful way to decompress after the day. 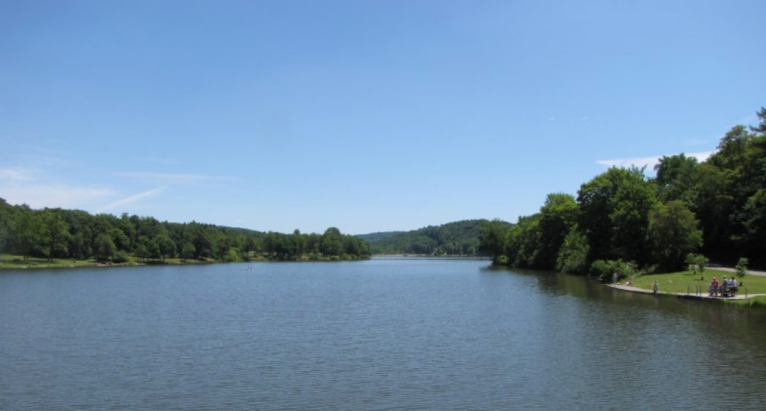 Sunday morning, we loaded up and drove to another lovely park.  Twin Lakes Park in Latrobe, PA is a gem.  Once again, we had lovely wide paths to hike, access to the lakes, people politely greeting and passing us.  The park is beautiful and tranquil.

What a wonderful, relaxing start to the day.

One thought on “Two Dog-Friendly Parks near Pittsburgh”